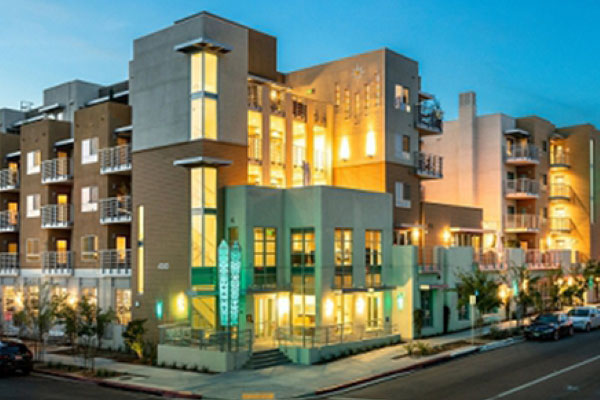 Community HousingWorks (CHW) recently celebrated the opening of the North Park Senior Apartments in San Diego, California, one of only a handful of developments in the country that provide an affirming and supportive environment for lesbian, gay, bisexual, and transgender (LGBT) seniors. "CHC believed in the project early and invested in it early,” said Sue Reynolds, President and CEO of CHW. “This project had a market-rate component with the purchase and sale of the land across the street to a for-profit developer. That sale ultimately subsidized the affordability of the North Park Senior Apartments. So it took a lot of vision and creativity for CHC to look at what was essentially a mixed-income project by an organization that had not done one at that scale before, said Reynolds."

CHW used funds from CHC to purchase a large parcel of land that was a former office building and parking lot at Texas Street and Howard Avenue. In the North Park neighborhood of San Diego, the site was an ideal infill location with a nearby bus line and easy access to downtown San Diego. Total funding for the project came from a mix of sources, including US Bank, Union Bank, the San Diego Housing Commission, the City of San Diego, HUD, FHL Bank San Francisco, Torrey Pines Bank, and a $4,635,000 land acquisition loan from CHC.

Many seniors face housing challenges, but pioneering LGBT seniors are especially vulnerable because they often lack family and social support. The apartment complex has on-site support services provided by the San Diego LGBT Community Center, an organization that originally championed the project with a 2011 community-needs assessment addressing the concerns of local LGBT seniors. The new apartments target all seniors earning less than 60% of the Area Median Income, with four apartments reserved for residents with visual and hearing impairments. Eight apartments are home to formerly homeless seniors.

An essential goal was to create a real sense of community for the residents at North Park. "One of my favorite visits there was meeting a resident couple that was showing me some of the nice crafty decorations and artwork they had made for their new home," said Reynolds. "When I noticed some beautiful curtains, one of the men fessed up that he had made them himself. He laughed and said that he shouldn't tell people about it because he'd be making curtains all the time. When I said that "it never hurts to make extra money here and there," he said, "I would never charge my neighbors money for help!" Reynolds added, "I guess that sense of community is working!"

CHW received a Gold Nugget Grand Award and Award of Merit for Best Senior Housing Community and Best on the Boards Site Plan. CHW also received a Ruby Award in 2018 from the San Diego Housing Federation for this innovative and affordable housing development. The Ruby Award recognizes excellence in affordable housing and community development, highlighting the accomplishments of people, agencies, and developments that work to ensure all San Diegans, regardless of income, have a safe, stable place they can afford to call home.

CHW has developed over 3,100 rental apartments in 37 communities, each designed to be healthy and vibrant communities that improve their neighborhoods and offer residents an array of programs to help them achieve their individual and family goals. CHW's comprehensive programs serve more than 9,000 children and adults each year. CHW is San Diego County's only member of the national NeighborWorks® Network and an award-winning affiliate of the UnidosUS.